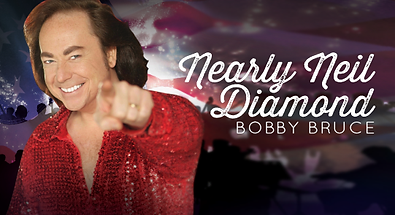 Bobby Bruce grew up on stage; appearing in film and television as a child, in musical theatre and rock revues in his youth, he has invested more than a quarter of a century honing his triple-threat set of entertainment skills.  For over fifteen years Bobby has been astounding appreciative audiences around the globe with his dynamic and passionate musical tribute to Neil Diamond.

On his first national tour of Australia, the press dubbed him “Nearly Neil” and the name stuck.     His travels stretch from Kota Kinabalu on the island of Borneo to the Cayman Islands; aboard luxury liners at sea, on national tours stretching tens of thousands of miles, to audiences as large as  30,000 – Bobby continues to impress.

Purchase your tickets at the Sechelt Legion Bar.