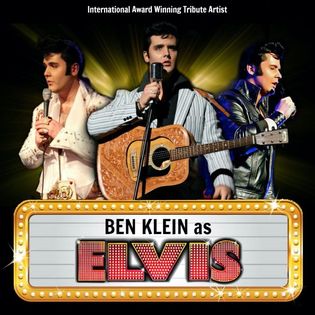 In 2002, he bought a ’50’s Elvis CD for his Dad Randy, who was an Elvis tribute artist before Ben was born. Then realizing his own resemblance to the young Elvis, he borrowed the CD, found movies and videos and decided to listen, watch, study and practice. Ben has the looks, the voice, the moves and more! He sincerely feels that if Elvis could say one thing to him it would be to perform his music, especially Gospel, with as much passion as he can.  Ben has won eight (one of them Gospel)

He also has seven First Runner up place wins . . .”Images of the King” in Marquette Iowa, Two at Council Bluffs Iowa, and Two at the “Tribute to the King” Competition in Milwaukee Wisconsin, and two at the Penticton B. C. Elvis Festival.

That same year he performed in the exclusive tribute show “Good Rockin ” Elvis Day Festival in Memphis, the first ever, presented by Elvis Presley Enterprises and Elvis International Magazine.

In 2007 he became a member of the elite E.P.E. Top Ten Ultimate Elvis Tribute Artists in the World !! He finished in 5th place!

IN MEMPHIS ON AUGUST 12TH, 2011, HE WON FIRST RUNNER UP IN THE ULTIMATE ELVIS CONTEST SPONSORED BY LEGENDS IN CONCERT AND ELVIS PRESLEY ENTERPRISES!

He has also worked for Legends In Concert on the Norwegian EPIC Cruise Ship twice and in multiple casino locations.